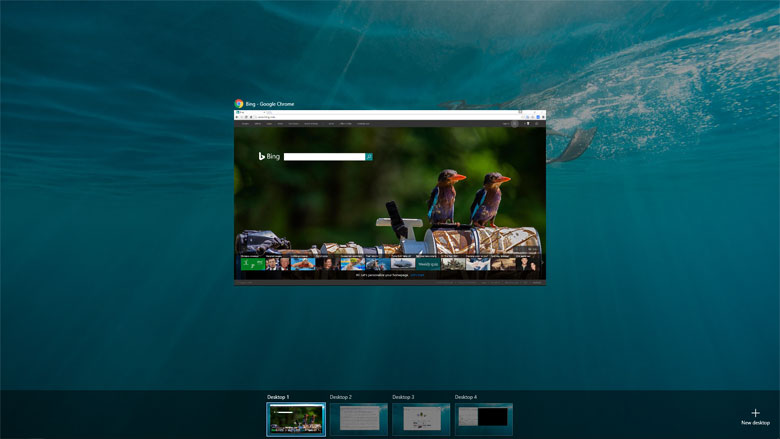 Windows 10 has a feature called Windows 10 Virtual Desktops Task View that gives you the ability to create virtual desktops.

What are virtual desktops you ask?

How to add a virtual desktop

To switch between virtual desktops open the Task View pane and click on the desktop you want to switch to. You can also quickly switch desktops without going into the Task View pane by using the keyboard shortcuts Windows Key + Ctrl + Left Arrow and Windows Key + Ctrl + Right Arrow.
Another way you can also switch between desktops using the keyboard shortcuts is by pressing the Windows key + Tab. The programs on the currently active desktop display as large thumbnails. The thumbnail for the currently active program on that desktop is outlined. Now, press Tab again. This removes the outline from the active program thumbnail and Task View interface active. Now use the arrow keys to move to the desktop you want in the Task View interface. When you have highlighted the desktop you want to switch to, press the Enter key.

Move a window from one desktop to another

We’ll pickup and return your computer equipment for FREE

What our clients are saying about us on Google

Zeros Ones Computer Repair WordPress Website Design and SEO
5.0
Based on 10 reviews

Total Window Treatments
19:42 01 Mar 22
John provides excellent service! John responds quickly, is very knowledgeable, and honest. He will go above and beyond... to solve any issues. He has helped us out numerous times, we always know we can count on John!read more

Joe Gallwas
03:17 16 Jul 21
Great service, issue was fixed in under 24 hours. My pc wasn't outputting anything into my monitors. When we went to... John, he worked on it with effort, determination, and diligence. The process was completely stress free, and he even called us on the phone to ask questions about the situation as he was working on it. Great guy, hardworking and nice. Definitely recommend to anyone, and we will be returning if anything else occurs!read more

Joan Chrabot
21:13 11 Feb 21
John was extremely helpful in straightening out a software attack from a hacker that corrupted my entire system. He... responded the same day I contacted him and within 24 hours the problem was resolved. My computer was returned in excellent condition. The entire experience was completely stress free! His fees were very reasonable and I would recommend him to anyone. I will continue to use him for any further computer issues that may arise.read more

Tracy Kelsey
08:20 03 Jan 21
Excellent job. I'm not a "techie" so having someone to explain the repair in layman's terms was a plus. Quite... knowledgeable, fast service (even right after Christmas), and fair pricing. Would definitely use services again.read more

Eileen Corcoran
00:10 26 Oct 20
I cant express enough how wonderful of an experience we had working with John. We contacted him because we were having... constant connectivity issues and my old laptop no longer was able to keep a charge. John completely fix our connectivity problems which turned out to be ineffective equipment from our service provider that we were being changed monthly for....grrrrr!!! John spent time with us and taught us about what the problem was and what type of modem and router would work best in our home. He then searched for the best deal and when it arrived he installed the new system which was no easy task. After he finished installation he stayed with us until every computer, smart phone and printer were up and running. He also recommended and taught us the best ways to safeguard ourselves during setup so that moving forward no one could access our information.Oh...and my old laptop is once again running like it did when it was new!!!I am so glad we found John. He will forever be our "computer guy". I would HIGHLY recommend him!!!!read more

Kathy Wells
17:28 12 Aug 19
I have used Zero Ones computer repair since 2016 for my small Insurance Agency. Services include setting up new... computers including network and printers and cleaning/updating and removing computer viruses from existing computers. Nice to have a reliable source to keep my computers running smoothly.read more

Matthew Cooney
03:18 07 Aug 19
I and my business, House of Glass, have been using Zeros Ones for over four years now. He has helped us with... everything from printer setup, network setup, solid state drive installation, new custom towers, and trouble shooting. He is very knowledgeable about all hardware and software, old and new. And with as many problems we've had, I consider John a friend now. Give him a call, and I'm sure you'll be happy.Mattread more
Next Reviews

What our clients are saying about us on Yelp

Sandra I.
2019-06-01 16:18:39
I have had John from Zeros Ones repair my computers for years. He is very reliable and knowledgeable. He looks to find the best solutions for your needs. I... read more

Business copier features such as scan to email and scan to folder setup. We now offer copier advance feature configuration and setup service for all major copier / printer OEM's. Network installations | get your printer on the network Advance features such as Scan to email | Scan to folder | make your copier more useful Xerox Lexmark HP Kyocera Konica Minolta and all major OEM's

Below are some RSS feeds from some websites around the internet that we at Zeros Ones enjoy and find of interest.

Tap to Call Us
MENU